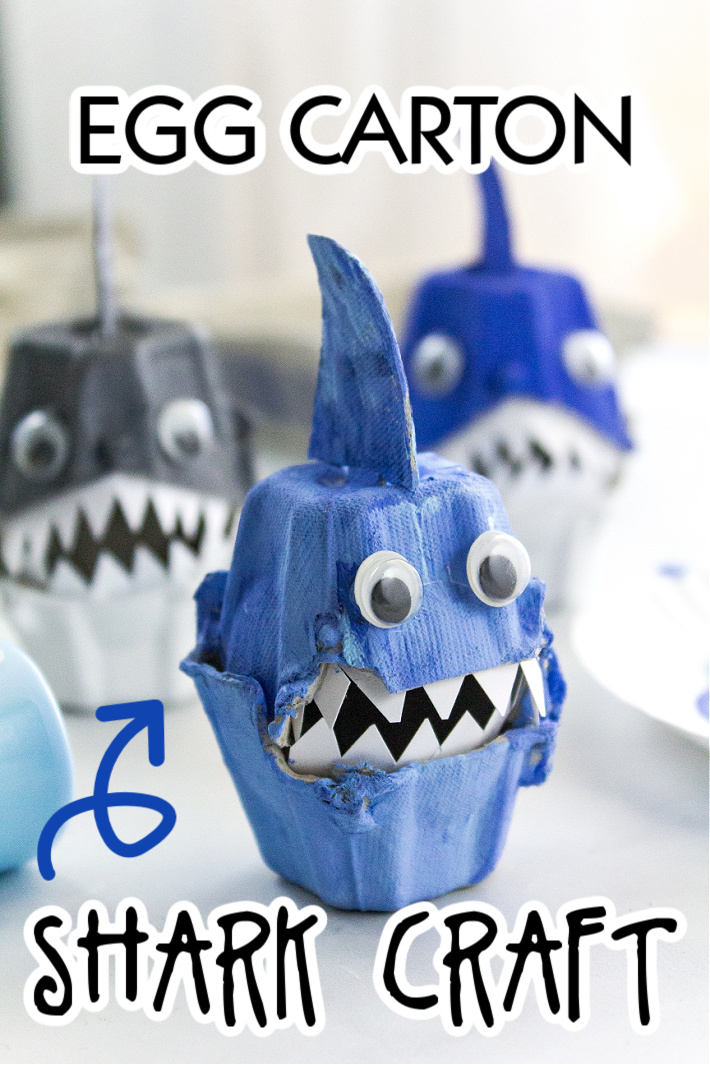 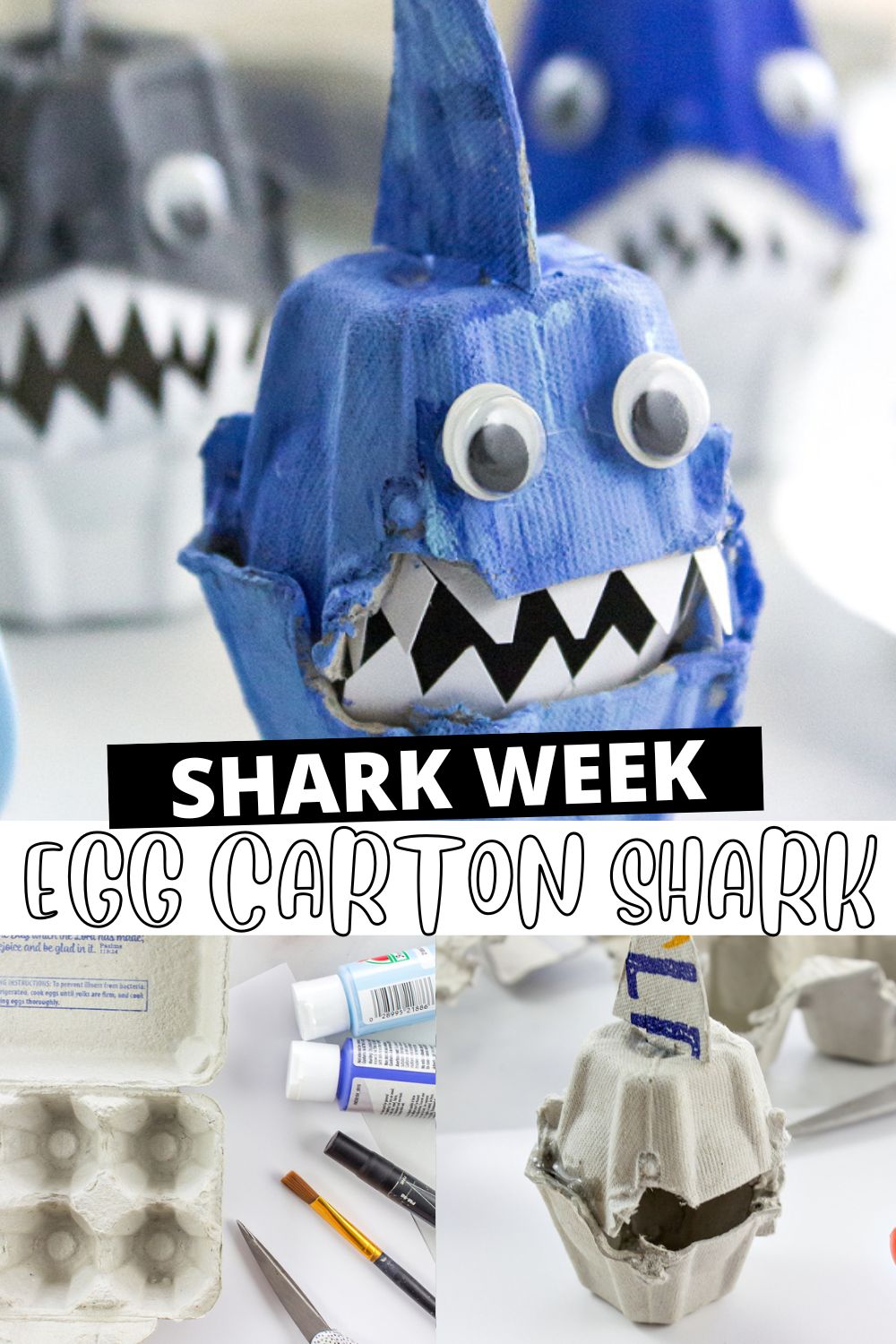 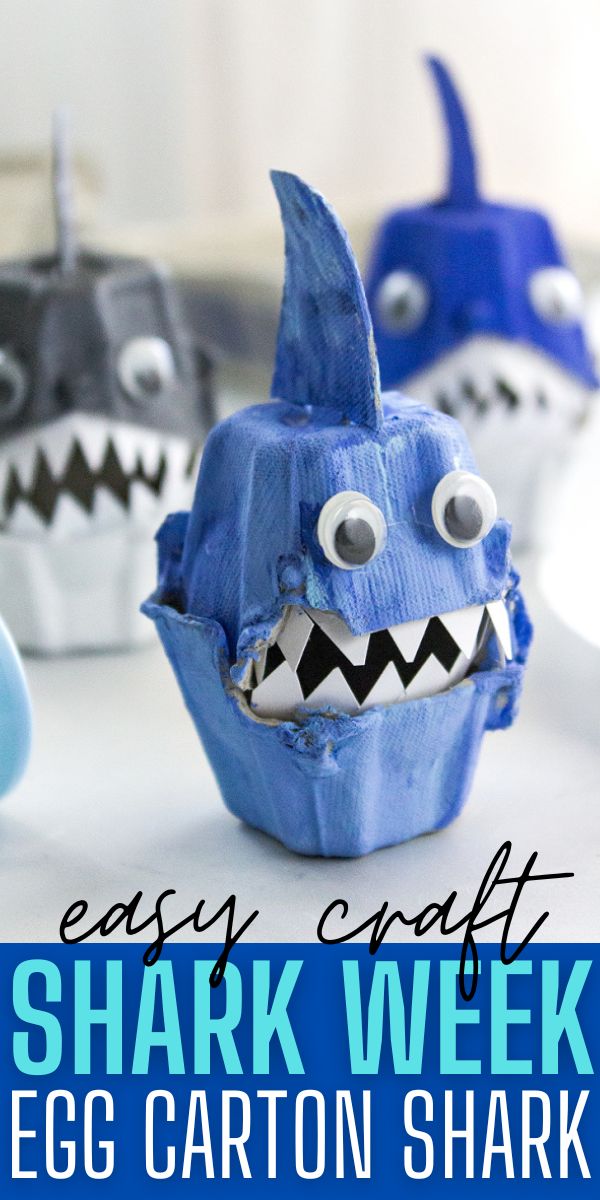 Are you ready for shark week? Make our jawsome egg carton shark craft with the kids. This is a great way to repurpose an old egg carton.

We are going to cut up an old egg carton and make egg carton sharks. This is a fun craft to make with the kids while you are enjoying Shark Week shows. Don’t forget to make some fun Shark Week treats to enjoy too.

How to make our egg carton shark craft

To make our egg carton shark you will need an old egg carton, paint, scissors, googly eyes, and glue. This is a great project for a parent or older kid to make with younger kids.

We included a black marker in the image above, but after using it to make the eyes, I decided to add googly eyes on top.

We also found that the glue stick didn’t work quite as well, however, kids can use school glue instead. If making the project with an adult, use hot glue which will dry instantly.

Cut out two cups from the egg carton, and then cut out a shark fin with a small tab at the bottom. You can sketch the shape onto the lid of the egg carton first and then have the kids cut it out.

Use glue to attach the egg cups together. Cut a small slit into the top of egg carton and insert the fin, making sure to add a little glue so that it doesn’t move or come out.

Egg carton shark craft tip:  I highly recommend attaching the shark teeth (in step 4 below) to the egg cups before you glue the cups together. We didn’t do this step first, but for little fingers, it would make the craft so much easier to make.

Once the glue is dry on your egg carton shark it’s time to paint it. We painted this one with a combination of two different shades of blue, but if you look at the image at the top of the post you will see we did one grey and white, and a third blue and white.

Cut out shark teeth from the white card stock and glue them to the egg cups. Either draw on eyes or glue googly eyes to your shark.

Are you going to make fun shark crafts with the kids during Shark Week?

Your Teen Will Thank You for This Fantastic Summer Reading List

Top Things To Do in Miami & South Florida this Weekend with Kids: Marlins Fun Day, Swim with Santa | MommyPoppins

NASA Releases New Images of Stars, Galaxies and an Exoplanet For The First Time in Decades Kids Activities Blog

7 series to binge-watch after bedtime

Your Teen Will Thank You for This Fantastic Summer Reading List

What is it and does it actually work?

Get Well with Wink — The Baby Cubby

What is Nipple Confusion? — The Baby Cubby

My Mom Life Might Look Dull, But It’s the Life I’ve Always Dreamed Of

This is the Single Biggest Enemy All Freshmen Face

Get Well with Wink — The Baby Cubby

Top Things To Do in Miami & South Florida this Weekend with Kids: Marlins Fun Day, Swim with Santa | MommyPoppins

The best baby cold remedies—and the ones you should avoid

The most important minute of your baby’s bedtime routine

8 fun games to play with your baby