Pesticides are abundantly used throughout the world, both in farming practices and domestically. Yet, despite their widespread use, there is little evidence on how pesticides affect the development of children in utero and after birth in low-resource settings.

A new Environmental Research systematic review assesses the risks these chemicals pose to the developing fetus and child. 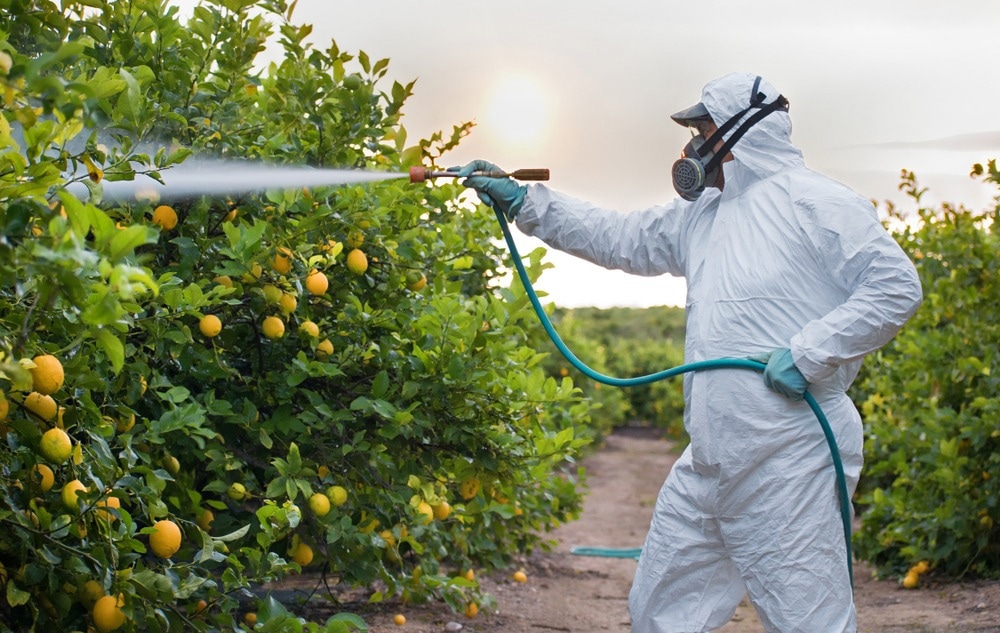 Although high-income countries (HICs) have a higher pesticide use per acre of cropland as compared to low- and middle-income countries (LMICs), the continuing lack of regulation, use of imported pesticides banned in exporting countries, and lack of safe procedures to handle, store, apply, and dispose of pesticides in some LMICs may increase the rate of population exposure from contaminated food and water.

Children are at the most significant risk of pesticide exposure due to their lower body weight, tendency to have much greater contact with potentially contaminated surfaces and objects, and immature development.

Pesticides may disrupt childhood development through several mechanisms, including endocrine and metabolic perturbations, as well as deleterious alterations of the gut microbiome. In addition, pesticide exposure has also been associated with a newly described condition called environmental enteric dysfunction (EED), characterized by a leaky gut and poor nutrient absorption.

In HICs, exposure to organochlorine (OC) pesticides in utero has been linked to adverse outcomes, including small for gestational age (SGA), preterm birth, and reduced birth weight and length.

Nevertheless, conflicting results have also been reported. Organophosphates (OP) and herbicides are not associated with these outcomes.

Postnatal exposure has also been considered harmful; however, different studies have reported varying effects. For example, one review reported a predisposition to obesity with postnatal OP exposure but not OC. However, this was contradicted by other studies that showed OC exposure to be associated with later-life obesity.

Little is known about pesticide exposure and childhood development in LMICs due to the limited amount of available evidence. The current study consolidates the evidence on exposure to any pesticide with fetal and child growth outcomes.

This is the first systematic review of studies on prenatal and early childhood exposure to pesticides from LMICs. This is an important addition to existing knowledge that focuses on HICs or combines both types of settings or simply does not describe differences in the types of pesticide used.

The researchers also chose to cover the entire field of pesticides used in LMICs, rather than focus on one compound. In addition, multiple outcomes, as well as both prenatal and postnatal periods of exposure, were assessed, thus enhancing the breadth of the review.

About 33% of the 31 reviewed studies were conducted in China, all of which examined prenatal exposures to pesticides, especially OC and OP pesticides, pyrethroids, carbamates, and their metabolites. These included compounds like dichlorodiphenyltrichloroethane (DDT), hexachlorobenzene (HCB), hexachlorocyclohexane (HCH), mirex, endosulfan, aldrin, dieldrin, oxychlordane, and heptachlor epoxide.

Of the studies on OC compounds, nine reported associations with increased or decreased birth weight. Among the studies on OP pesticides, only one of the nine showed a significant association. Similar results were found with birth length assessment.

Preterm births were associated with pesticide exposure in some but not all studies. Similarly, only one of three studies found a link between higher pesticide concentrations and SGA birth.

Later outcomes were also assessed, such as the body mass index (BMI) or height of the child at 16 months. Again, the results were inconsistent, with one study reporting an association between higher pesticide levels and lower height and BMI in early childhood.

OC exposure before birth appears to be linked to both lower and higher birth weight, thus causing this association to be ambiguous.

Pyrethroids might reduce birth weight; however, the evidence is limited. Pesticide exposure was also not unequivocally associated with birth length differences.

The evidence presented in the 31 reviewed studies was of very low certainty. Notwithstanding the breadth of coverage of this review, the included studies did not provide additional insights into the mechanisms that could potentially disrupt infant and child growth following pesticide exposure.

The effects of such a mix of potentially additive or synergistic toxins remain unknown.

The measured compounds in various studies may directly arise from pesticide use or as a byproduct of industrial manufacturing processes, thus confounding the results. In addition, DDT and other OC pesticides have not been used for over ten years; therefore, exposure to these pesticides is due to the consumption of meat, where these banned chemicals are concentrated. Yet, few researchers have correlated dietary intake with prenatal pesticide exposure, which could bias the results.

With LMIC research being limited by the constraint on resources, it is important to increase the capacity and infrastructure for such studies in these countries. Several trials and studies are currently being conducted to explore the link between child growth and pesticide exposure, especially since prenatal exposure may be heightened by postnatal exposure.

Given these challenges in assessing the causal impact of pesticides exposure on child growth, the precautionary principle can be adopted, especially with regards to highly hazardous.”

Excessive smartphone use may lead to early puberty

Newborns get routine heel blood tests, but should states keep those samples

12 things new moms wish they’d had on their list

Big Changes Coming to the SAT: Here’s What You Need to Know

Why Babies Cry When You Sit and Stop When You Stand

To All the Thirtysomething Moms

How to Make Homemade Sidewalk Chalk

Could the $950 Cruiser possibly be worth it?

How To Help If Your Teen Has Anxiety: One Parent’s Lessons Learned

24 Lovely Songs To Sing To Baby That Aren’t Lullabies

Top Signs That Your Baby Is Hungry