Pregnancy Symptoms: Am I Pregnant?

by admin
in PREGNANCY

Deciphering whether or not you’re experiencing pregnancy symptoms can be as confusing as it is challenging. Did I eat something that upset my stomach, or do I have morning sickness? Am I coming down with something that’s making me so exhausted? Did I drink too many fluids that I’m constantly urinating? With so many questions and doubts, you can convince yourself to believe it may be your menstrual period or something else entirely.

While no one pregnancy is the same, even for the same woman, many signs may point to a positive result. We’ve laid out which symptoms to look for before you miss your period and throughout your early weeks of gestation.

Pregnancy Symptoms: What to Watch For

There’s no specific formula for the timing of early pregnancy symptoms as it varies from person to person and pregnancy to pregnancy. Often, many moms-to-be do not notice any changes in their body until several weeks after conception. However, there are exceptions to the norm. You may be able to notice a difference in your body within as little as one week. For instance, sensitivity to smell and tender breasts may appear before you even miss your period or within days of conception. However, other indicators, like frequently urinating, will appear weeks later. Here is a breakdown of when many women notice specific symptoms.

It is a common misconception to believe that symptoms may only appear after you’ve missed your menstrual period. Not so! The human body works in miraculous ways and offers us subtle hints that we’ve conceived. We just have to pay closer attention to it. Here are ten early signs of pregnancy that may present themselves before a missed period1: 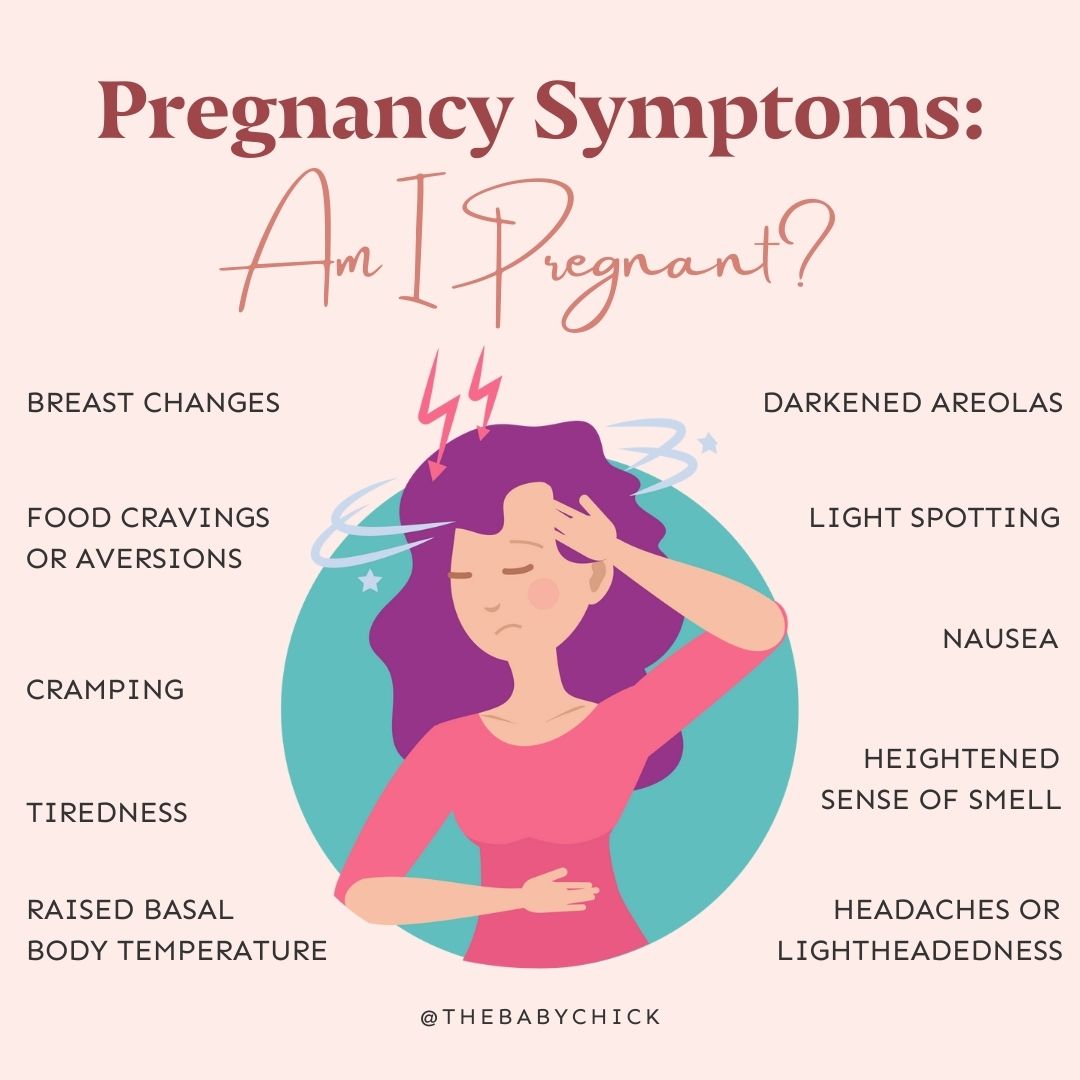 As stated above, many women may not notice any symptoms until further along in their pregnancy. Here is a general weekly breakdown of when women tend to feel symptoms in very early pregnancy.

Although it may seem odd, healthcare professionals determine your first week of pregnancy based on the first day of your last menstrual period (or the LMP dating method)2. This means that at week one, your period has just begun. At this point, you may be experiencing the usual pains of a menstrual cycle, such as fatigue, abdominal cramps, swollen breasts, and lower back pain, to name a few.

While you may already be mind-boggled, we’re sorry to toss in another wrench. At week two, you’re now ovulating. You will likely experience the common symptoms of this stage, such as light spotting, an increased libido, changes in your cervix and cervical mucus, and pelvic ache3. You may even have a better sense of smell due to hormonal changes at this point.

Once you’ve journeyed into week three, the pregnancy magic officially launches. At this stage, not only will your ovaries have released an egg 14 days after your LMP, but the egg will also travel through the fallopian tubes to be fertilized4. Remember: sperm can live inside your body for up to five days!

During this time, you may not even suspect that you’ve conceived, so symptoms will likely start to kick in a little after week three. Your initial indicator that you have a baby on board is a missed menstrual cycle (although this may not happen until week four)5. But you may also notice spotting, which is not to be confused with your period. This is known as implantation bleeding and occurs when your fertilized egg attaches to the uterine lining. Additional symptoms can include fatigue, changes in your breasts, mild cramping, belly bloat or gas, and a metallic taste in the mouth.

Following the third week after your missed period, there are several telltale signs of early pregnancy that many women may experience6. It’s important to note that not everyone will have the same symptoms. Some may have almost all key symptoms, whereas others may have only one or two. If you’re unsure of what you’re feeling, here are several early pregnancy symptoms that may indicate you’re expecting:

A majority of women who’ve confirmed with their doctor that they’re pregnant report feeling frequent episodes of fatigue. Not only do they find themselves napping when they usually wouldn’t, but they also can’t seem to kick the sleepiness no matter how much sleep or how hydrated they are. The reasoning behind it? As levels of progesterone (a hormone emitted from the ovaries) rise, women feel more exhausted than usual.

You may find that you’re urinating more than usual if you’re expecting. Since blood volume in your body increases during gestation, your kidneys must then filter your blood and remove the extra waste. This added waste is processed as a liquid in your bladder, leaving you to take frequent trips to the bathroom.

The most typical and obvious symptom that leads women to take a pregnancy test is a missed period. If it has been a week or longer and your expected menstrual cycle hasn’t begun, you might be pregnant. However, keep in mind that this symptom is not always a hundred percent accurate. Some individuals may have an irregular menstrual cycle, feel stressed, or have hormonal problems that result in a delayed or missed period.

Ah, the infamous morning sickness. As the second most notorious early pregnancy symptom, nausea can strike a woman morning, day, and night despite its well-known moniker. About 7 in 10 pregnant women experience morning sickness throughout the first trimester, beginning around six weeks of gestation.

While the reason for morning sickness is not entirely known, studies have shown that moms-to-be with nausea and vomiting within the first three months of their pregnancy may be due to the increase in hormones in the body from pregnancy.

Research has also revealed that this may occur due to human chorionic gonadotropin (HCG)—a hormone produced by the placenta soon after the fertilized egg attaches to the uterine lining. Those who experience severe morning sickness (hyperemesis gravidarum) have higher HCG levels than other pregnant women.

From swollen, sore, enlarged, or tender breasts, women may feel these various symptoms early in their pregnancy due to the increase in pregnancy hormones. The areola (the area around the nipples) may also darken.

Keep in mind that, while these signals may be informing you may be pregnant, the only way to positively confirm your results is to take a home pregnancy test and a visit your physician to perform an ultrasound.

It can be challenging enough, in the beginning, to determine if you’re pregnant with one child, but when you’re expecting two or more, your body will definitely provide some clues. Some early indicators include severe morning sickness (as if morning sickness isn’t bad enough!), rapid weight gain, and extremely tender breasts7. You may also notice extreme fatigue, a greater appetite, or begin showing sooner. However, the best method to confirm a twin pregnancy is to visit your physician’s office for an ultrasound.

You may have recognized some of the early signs of pregnancy seem very closely related to PMS–and you’re not wrong. The overlap between symptoms can be confusing and stir up a whirlwind of emotions8. To help you decide which symptoms correspond with which result, we’ve created a brief table to offer some guidance: 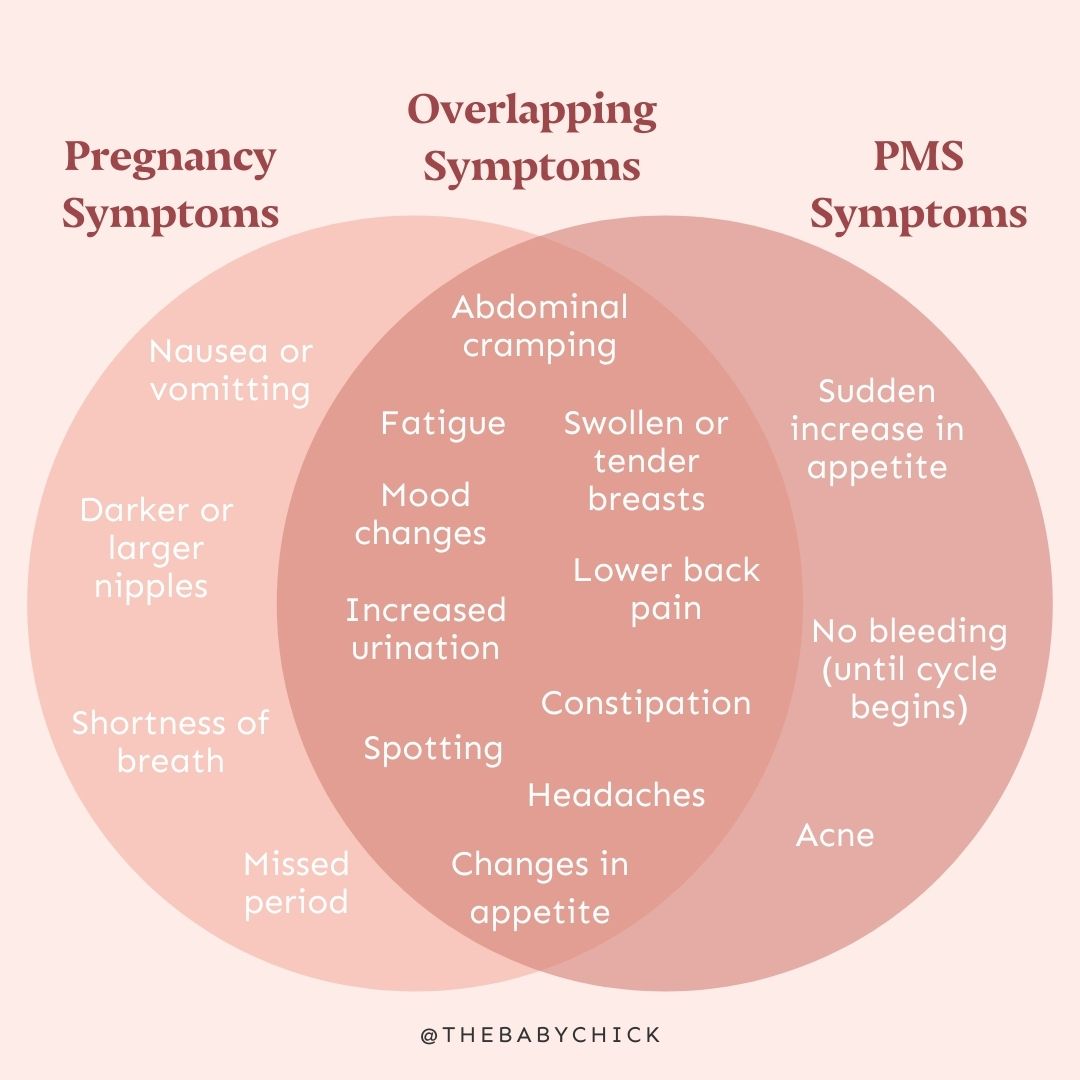 Determining if you’re expecting is an exciting time in your life! If you’re unsure whether you’re experiencing early pregnancy symptoms, your best bet is to take a home pregnancy test or schedule a visit to your doctor. They can perform a test or ultrasound that will provide accurate results!

When it’s not just morning sickness

Orgasmic Birth: Is It Real?

How secure is abortion access in Canada right now

Making This Summer Memorable for Your Kiddos (and You)! — The Baby Cubby

13 Halloween crafts for kids that are spooky and fun

How to Help Your Teen Step Away from a Toxic Friendship

How to Get Your First Job: Tips for Teens

Why Do So Many Teenagers Face Body Image Issues? : Help Your Teen Now

Simple Recipes to Make Your Baby in the First Year

How to Get Your Baby Talking! Tips & Tricks from the Speech Sisters